There are many possible answers to that question, though few of them, probably, have to do with fashion. Reality long ago overtook wardrobes as a source of perpetual astonishment.

Yet flying from the facade of the Musée des Arts Décoratifs in the Louvre as the first full season of couture shows since 2020 began, came a clarion call: “Shocking! The Surreal World of Elsa Schiaparelli.”

It was an announcement of a new exhibition as well as a reminder that once upon a time, clothing had the ability to confound.

That once upon a time fashion could jolt viewers out of their torpor or cynicism; challenge convention; make them blink and blink again merely with a flash of flesh, an astounding construction, a seemingly absurd idea about the body and what goes on top.

Yet in a world of increasing extremes, where truth is a fungible concept and crisis is starting to seem like the norm, that time seems practically quaint: a museum piece, in more ways than one.

Even at the couture, that designer laboratory freed from commercial constraints because it is made to order for the very few.

So what’s shocking now? Daniel Roseberry, the creative director of Schiaparelli, had an answer of sorts: “beautiful things.” Sometimes, in the face of overwhelming externalities and unrelenting grimness, he suggested, it’s enough to dazzle with delight; to offer a reminder of the ability to dream. Even if it’s a bit overinflated. It’s not about daywear, baby. 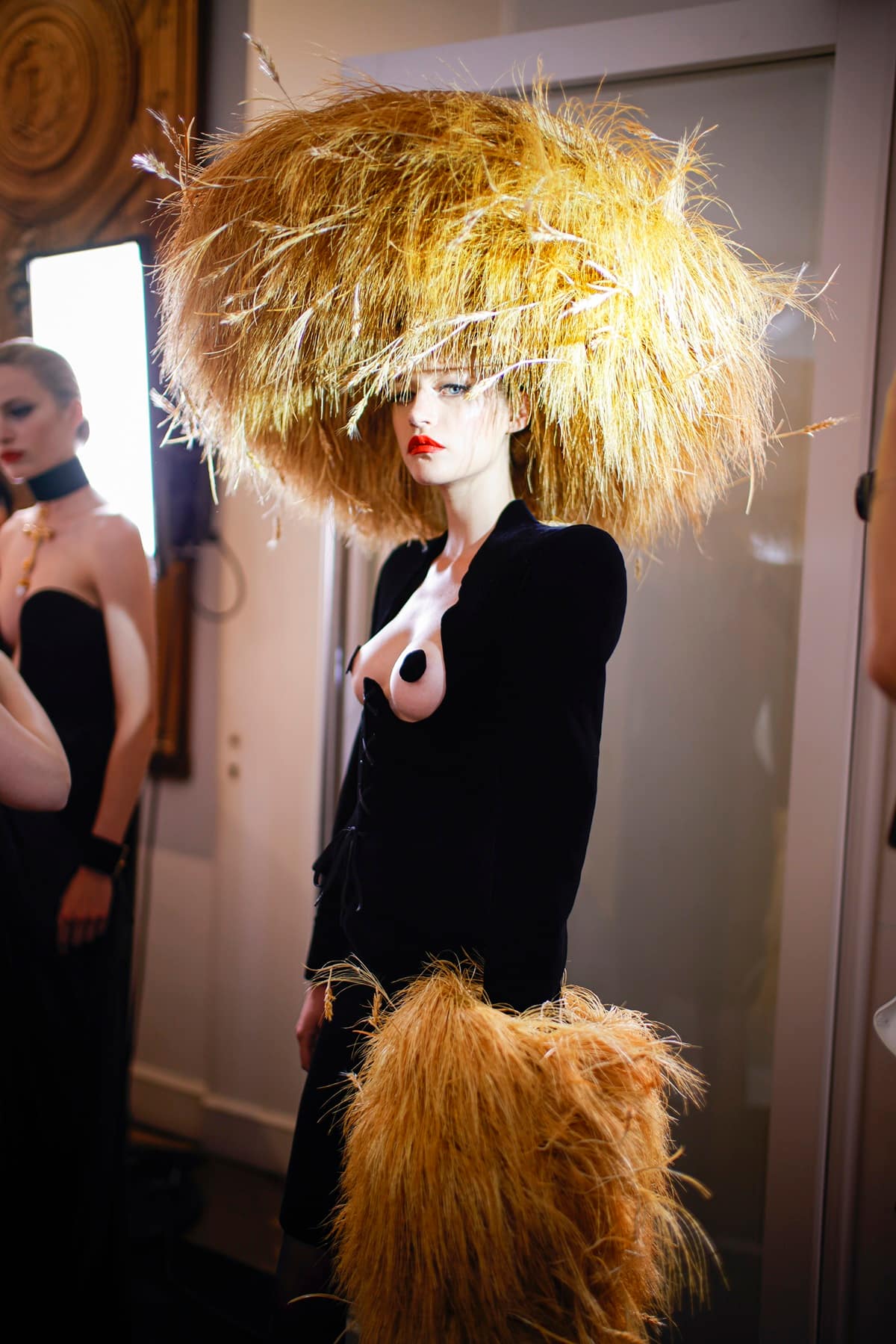 It’s about a hat that looks like an entire field of golden wheat (but actually was burned ostrich feathers); a black velvet cocktail frock sprouting glittering tulips or swirling under a tempest of satin; a dress composed entirely of bejeweled necklaces. It’s about dialogue: with the designers that came before, such as Christian Lacroix, who first revived Schiaparelli back in 2013.

Dialogue! Fancy that. It’s actually kind of a radical suggestion. (More radical, anyway, than the bared breasts Roseberry also sprinkled throughout his show, which seem at this point both banal and gratuitous.) And it’s got to start somewhere.

“At a time when our hearts are severely tested/by the news and obscurantism/we should remain rough and real,” Pieter Mulier of Alaïa wrote in a sort of preshow prose poem left on every seat (Alaïa being not a couture brand but couture-adjacent). “Rough and real” in the actual collection, referring largely to the tactility of materials and the touch of the hand.

Shown in a raw space that will someday be an Alaïa store, the collection was built on the bodysuit — in layers of stretch silk and knit, sometimes wrapped at the waist with an internal scarf serving as a skirt and dangling extravagant fringe — over which came squirts of whipped cream skirts and “shelter here” cocoon coats.

There were rough-edged leathers, some crisp white shirting (with hood) and, at the end, a skirt hung from the waist to cowl around the hips, dipping low enough in the back to expose twin slices of bare bottom beneath the bodysuit cut high on the thigh. Cheeky. And perhaps the way forward for a house that has been weighed down by legacy.

As it happens, Mulier had brought his whole atelier over to watch the show, which is turning into something of a trend at couture. Designers acknowledging they don’t do it alone — zounds. Another kind of shocking development.

Indeed, said Maria Grazia Chiuri in a preview before her Dior show, “fashion has this great opportunity to build bridges between people and support each other and be connected and open. It’s a big platform, and we have to use it.”

She uses it, increasingly, to expand the definition and ethos of couture, connecting it to the traditions of global craft — this season via the work of Ukrainian artist Olesia Trofymenko, whose designs combine classic cross-stitch techniques and painting. Starting with Trofymenko’s “Tree of Life,” Chiuri wove them, literally, into her own designs, embedding them in governess dresses and swaddling bathrobe coats, boxy skirt suits and lacy lady of the manor gowns.

If Marie Antoinette had swapped shepherdess dressing for folklore at Le Petit Trianon and self-indulgence for power sharing, this is what she might have worn. The colors were subtle (ecru, white, black, some red) and so was the suggestion. Which doesn’t make it any less pointed, or the results any less pretty.

It was Iris van Herpen, however, celebrating the 15th anniversary of her brand and returning to a live show for the first time in two years, who drove the point home. Connection is also at the heart of her work, but her topic is the past and future: how you take the old art of couture and make it relevant to tomorrow; how you find the point of congruence between nature and technology.

She called her collection Meta Morphism, referencing both the metaverse, fashion’s latest crush, and Ovid’s “Metamorphoses,” the stories of Daphne and Narcissus. The result was proof positive that if ever a designer was going to free us from the bounds of the physical world and show us how to dress in a digital dimension (where, perhaps, couture might not just be something to look at for the masses, but something to wear), it is van Herpen.

She’s working in a whole different vernacular than any other designer, and with entirely different tools, including 3D printers and laser cutters, so her clothes look like clothes (mostly) but also organic life-forms: butterflies and Venus Flytraps extruding filaments that tremble and flutter around the body with the breeze of a gesture, mixed up with a dash of ancient mythology, with faces poking out in three-dimensional ribbons on coats and gowns to glance around in curiosity and wonder. They rewrite the physics of dress and reimagine the body without erasing it, not in a cartoonish way but in an utterly convincing way.