The evolution of the skate shoe industry

Most early skateboarders rode barefoot out. The reason for this was simple. The skateboard was an extension of a surfboard, and you didn’t need to wear shoes while you surfed.

There were, of course, some downsides to skating without shoes – if you weren’t careful, you might possibly shred your feet.

One of the earliest shoes to find its way onto skaters’ feet in the 1960s was Converse’s Chuck Taylor All Star model.

This was a high-cut canvas shoe inspired by one of basketball’s earliest stars. Of course, many companies copied the Converse style, and knockoffs can be found to this very day.

The shoe was available in both a low-cut and high-cut version.

In the 1980s, the Chuck Taylor All Star shoes reached their Oofos Shoes height of popularity and were standard issue for many skaters.

Street skaters and freestylers liked the soft sole of the shoes and the sensation of almost being able to feel the board under their feet.

In 1965, an advertisement appeared in The Quarterly Skateboarder for the Randy 720.

It was marketed as the skateboard sneaker for sidewalk surfing and was made with “Randyprene for Built In Tuffness.”

It was also billed as the official sneaker of the National Skateboard Championships. 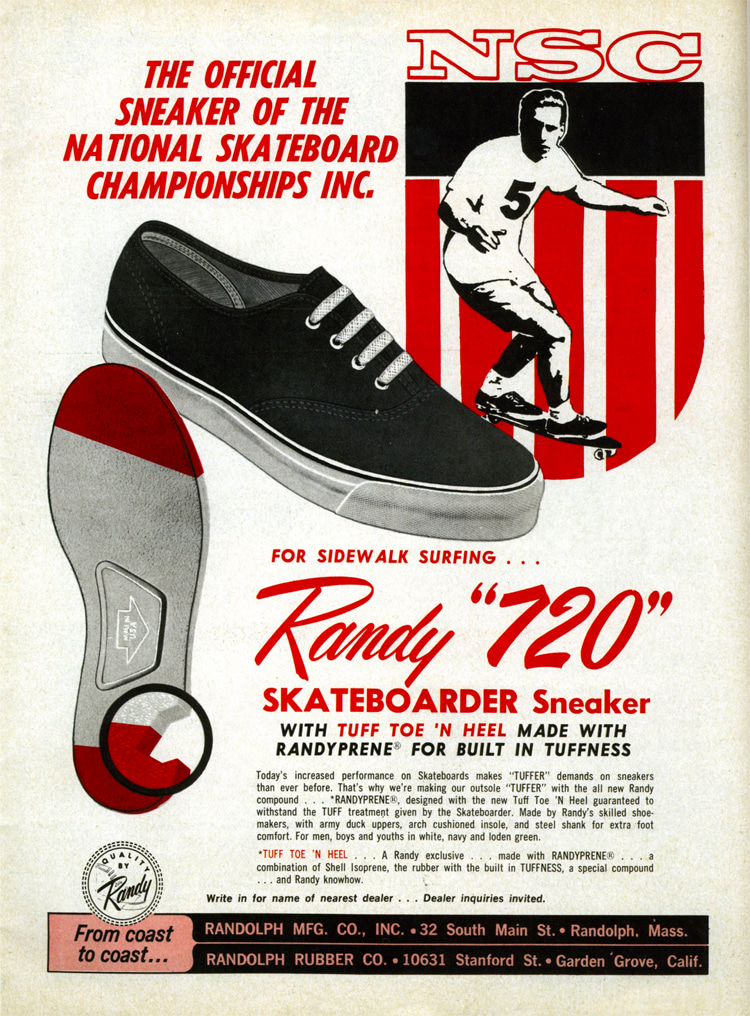 However, to most skateboarders, Vans are the true original skateboard shoe. The Vans’ story begins with brothers Jim and Paul Van Doren in 1966.

At the time, the Van Doren brothers were already 20-year veterans of the shoe industry. The duo teamed up with Gordon Lee and Serge D’Elia to build a shoe factory in Anaheim, California.

The factory was capable of producing both canvas and leather shoes in a variety of styles and widths. The plan was to make high-quality shoes and sell them directly to the public.

The Van Dorens soon opened a chain of stores in California and found that people liked their durable, well-made sneakers.

The Van Dorens experienced great success with the retail shoe outlets, and by 1974 they had almost 70 stores in California.

Over the years, surfers had become fans of Vans.

When skateboarding’s second wave hit, Vans were poised to move its marketing and sales focus to skaters.

The campaign to move into the skateboard market was led by Betty Mitchell, who worked in public relations for Vans for a long time.

Many skateboarders were also into surfing, so the jump was quite natural.

The industry magazine SkateBusiness summed up the situation concisely.

“Many popular skateboarders in the early 1970s – like Tony Alva, Stacy Peralta, and Jerry Valdez – were skating in Vans.” 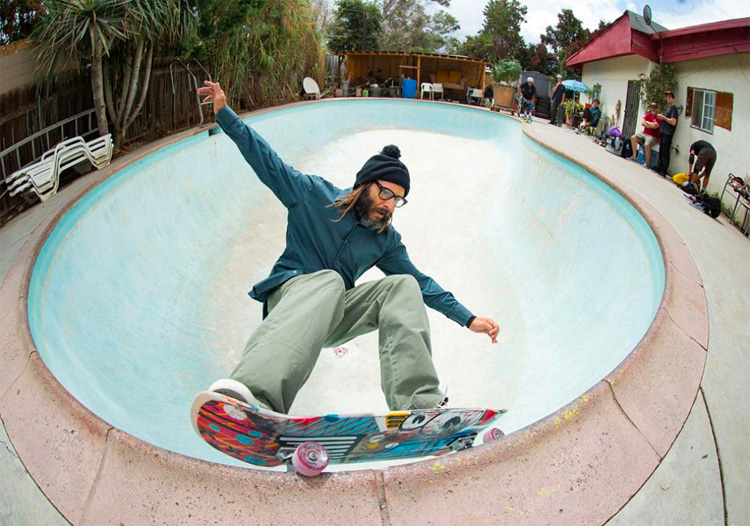 The Timeless Off the Wall Shoe Model

There is no question the pros heavily influenced the general skateboarding population to go out and buy “the real skateboard shoe.”

Originally, Vans were only available in three colors.

In the mid-1970s, Vans went from this plain styling to a red and blue, two-tone look. In addition, more padding was added to the shoe for additional comfort.

This shoe was called the Off the Wall model, and it became very popular with skaters.

Soon after, Vans introduced both a medium and a high-cut shoe. Running Shoes They even added ankle protectors to their product lineup called Van Guard.

Although skateboarding was in a slump in 1982, Vans had major success that year with their black and white, checkered shoe, as a result of Sean Penn sporting them playing the character of surfer dude Jeff Spicoli in the movie “Fast Times At Ridgemont High.”

After this success, however, Vans ran into some financial difficulties.

Over time, things worked out. But in 1988, the company was sold to a venture banking firm.

Vans continue to be a major player in the skateboard shoe industry.

They have been involved in professional and amateur contests like the Triple Crown of Skateboarding and the Warped Tour, respectively. 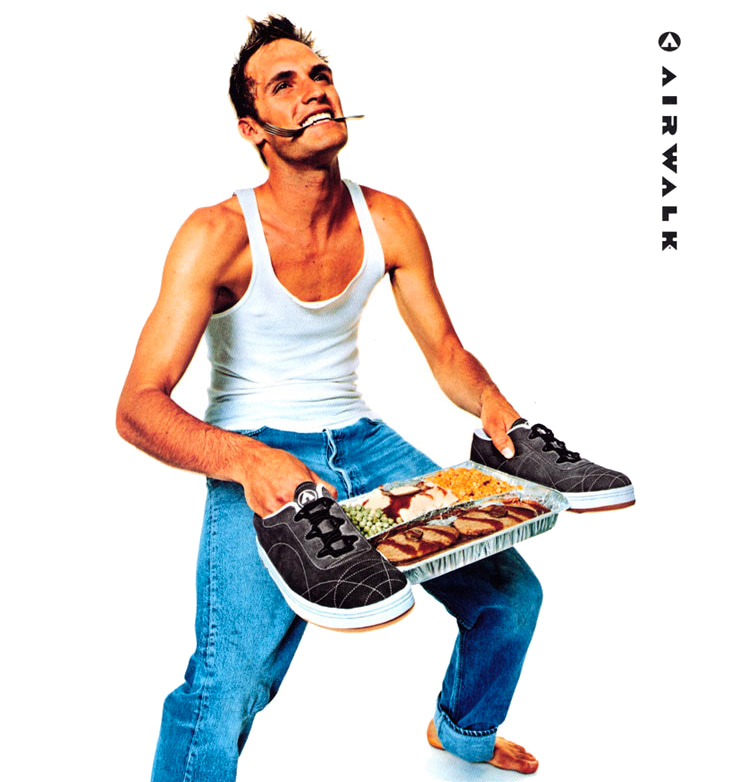 Vision and Airwalk: Breaking In and Wiping Out

Vision was one of the first companies to leverage its skateboard credibility with a fashion and shoe merchandise lineup.

As a result of Vision’s aggressive promotion, they were incredibly successful in the mid to late 1980s.

Unfortunately, Vision struggled when new skateboard companies came on the scene with a more alternative image.

Pro riders bailed out, and the Vision merchandise and logo were now considered too mainstream by skaters.

Of course, while all this was happening, Vision was also Hey Dudes Shoes facing intense competition from another shoe company called Airwalk.

Airwalk was started in 1986 by George Yohn. Like the Van Doren brothers, Yohn had spent many years in the shoe industry.

Before launching Airwalk, Yohn had made several attempts at capitalizing on the athletic shoe market.

He had gone from aerobics to jogging to tennis shoes without much success.

As detailed in Forbes magazine, “One of his designers noticed a sport that had yet to be exploited by a sneaker company: skateboarding.”

Yohn quickly designed a specialized shoe with generous amounts of material plastered over it to ensure durability.

He named the shoe after a trick called the ollie airwalk. With this trick, a rider’s feet spring off the board and go sideways while he grabs the nose of the board.

The company remained focused on the skateboard market and featured pro riders like Tony Magnusson, Lester Kasai, and Tony Hawk in their advertisements. 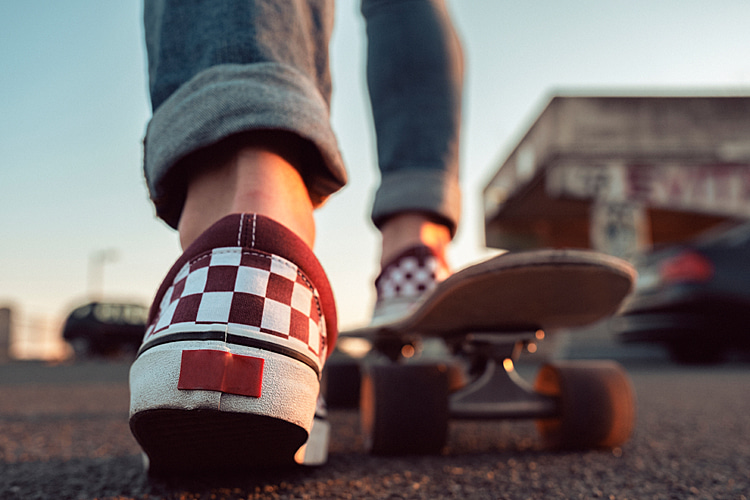 The late 1980s saw a move to a tremendous amount of ollie-based maneuvers. Jumping with your front foot and scraping it against grip tape led quickly to shredded shoes.

Airwalk addressed this problem with additional protection on the front of the shoe.

By 1990, Airwalk sales had reached $20 million, but then the early 1990s bust hit. Their sales fell to $8 million, and Airwalk was in deep trouble.

Yohn then hit upon the idea of taking skateboard shoes outside the skateboard market. Sales rebounded tremendously as Airwalk went mainstream.

Their shoes could be found in places such as Sportmart and Footlocker.

However, this newfound success was to prove both a blessing and curse in much the same way it had for Vision.

The skateboard specialty shops, along with their customers – skateboarders – felt Airwalk had slighted them by going too mainstream.

The shops were upset that they were now forced to compete with the large chain stores.

Some skaters disliked that Airwalks were now becoming a fashion statement for the masses as opposed to being exclusive to the skateboard industry.

The company was forced to take a hard look at its impact on the skateboard industry.

Airwalk’s answer to the problem was to give skate shops exclusive rights to sell their skateboard shoes and let other retailers handle the rest of the line.

The strategy appeared to be meeting with some success.

Changes in the skateboard shoe industry in the 1990s included an increasing number of pro skaters getting their own signature shoes and the rise of smaller companies to challenge Vans and Airwalk. 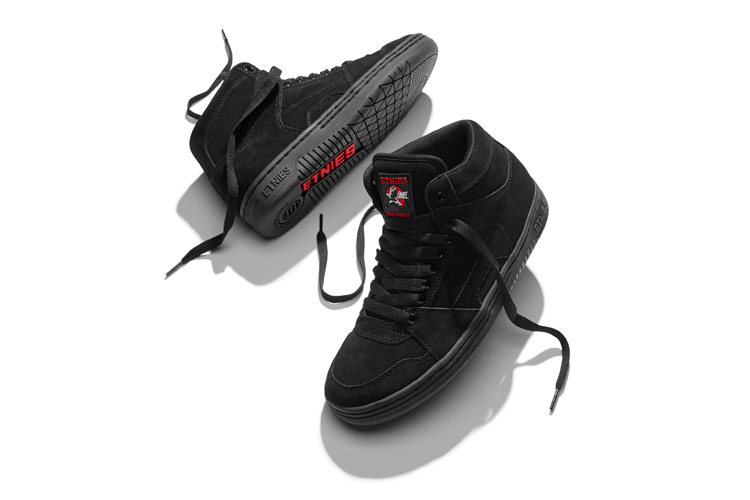 Etnies were one of the first shoe companies to take on Vans and Airwalk.

Etnies shoes were originally brought over to North America by French pro freestyler Pierre Andre in 1990. Etnies quickly made an impression on the skateboard market with their Natas Kaupas signature model.

Natas was a legend in street skating and had made a name for himself with Santa Monica Airlines.

Unfortunately, in 1995 Andre was faced with the potential loss of the Etnies trademark.

Eventually, Andre was able to secure the Etnies name for himself, and the company continued marketing four distinct brands.

Over time other skateboard shoe companies sprouted up – Simple, DC, Axion, Hook-Ups, Nice, Duffs, Osiris, 2-Fish, and Globe were just a few of the many brands that became available.

The skateboard shoe business has become very competitive, and in economic terms, it rivals the size of the skateboard industry itself.

Larger, more traditional sports shoe companies like Nike and Adidas have developed their own skate shoes after seeing the market’s potential.

In 1997, Nike gained worldwide attention for their ads promoting skateboarders in a positive light, i.e., skaters as athletes.

Their television spots featured golfers and joggers being hassled in much the same way as skateboarders are.

Nike received an incredible response to the ads from both skaters and non-skaters, most of which were very favorable.

Whether it’s Vans, Simple, DC, Converse, Last Resort AB, Emerica, eS, Fallen, Globe, HUF, Lakai, or New Balance, skaters pick up on a style and make it their own.

Others – primarily non-skaters and sometimes parents of non-skaters – see the benefits, i.e., durability, comfort, and want to be part of the action.

It’s fairly reasonable to say that, today, skate footwear companies are the bridge builders of the generation gap.